Brea, Calif.  — Capt. Chris Trosset guided the Ragged Branch Distillery fishing team to a momentous and lucrative victory in the prestigious 2021 Key West Kingfish Mayhem Tournament, taking the top prize trophy in the Open Division, along with a total of $50,000 in prize money and various Calcutta side pools.  This event, which took place over the weekend of January 16, featured about 75 boats fishing in the Pro Series and Open divisions.

Their division-winning fish was a torpedo of a king mackerel that tipped the official weigh-in scales at 61.6 pounds.   The team also weighed in an impressive 52.7-pound king that put the team over the top in a variety of aggregate weight and other side bets.   Trosset — son of world-renowned Key West 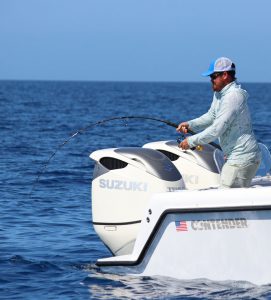 fishing legend Capt. Robert “RT” Trosset — was chartered for the tournament by representatives of Virginia-based Ragged Branch Distillery, a craft bourbon maker who is also a sponsor of the Kingfish Mayhem Tournament Series.  Ryan Shapiro — who caught the 61.6-pound winning fish — joined Nicole Spence and Alex Toomey aboard Trosset’s Contender 35ST center console powered by twin Suzuki DF350A outboards, to compete against some of the country’s best kingfish anglers as Team Ragged Branch.

Trosset and his crew, which included long-time mate Justin Carley, made the long run south of the Dry Tortugas in search of super-sized mackerel, and got the pair of trophies to hit slow-trolled blue runners fished on Fin Nor Pelagic Marquesas 40 reels and Penn Carnage II rods.

“We couldn’t prouder of Chris for winning this highly competitive tournament, or of the way he has represented the Suzuki brand at high-profile events around the country,” said George “Gus” Blakely, Vice President of Suzuki Motor of America, Inc. Marine Division.  “We have worked with his father RT for an amazing 35 consecutive years, and watched Chris grow into a master angler and fishing guide in his own right.  We’re looking forward to our continued connection with Key West’s ‘First Family’ of sport fishing, and can’t wait to see what angling accomplishments the future might bring,” Blakely added.