BIRMINGHAM, Ala. — The last spot in the 2022 Academy Sports + Outdoors Bassmaster Classic presented by Huk will be filled on historic Lake Eufaula as this Alabama fishery hosts the Bassmaster Team Championship and Classic Fish-Off Dec. 8-11, 2021.

Battling for that coveted berth in the Bassmaster Classic will be the grassroots anglers competing at the Bassmaster Team Championship. The team portion of the event will be held Dec. 8-9 and will feature anglers from across the country — 32 states in 2020. The winning duo will not only win a cash prize, but they’ll also lead the charge into the Classic Fish-Off which will take place Dec. 10-11.

The top three teams through Day 2 — six anglers in all — will have their weights zeroed and then compete individually in the Fish-Off. The competitor with the 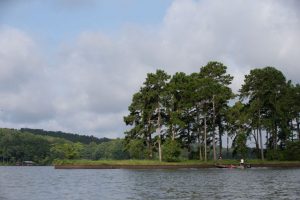 heaviest two-day total of the group will earn their spot in the Classic.

In 2020, that honor went to Jordan Wiggins, a 29-year-old Cullman, Ala., resident whose older brother Jesse notched a third-place finish in the 2019 Classic.

“What a wonderful way to end a year,” says Ann Sparks, Tourism and Main Street Executive Director for the City of Eufaula. “We are thrilled to be hosting the Bassmaster Team Championship and showing off what Lake Eufaula has to offer! Most anglers have fished our great lake, but we are excited to show off our changes and improvements to our beautiful town.”

B.A.S.S. has visited Lake Eufaula 17 times for major events, including an Elite Series tournament last year that was broadcast live to an audience of more than 2.8 million. The town itself — with a statue declaring Eufaula as the “Big Bass Capital of the World” — is known throughout the fishing industry as the hometown of legendary angler and lure designer Tom Mann. It’s the home of Mann’s Bait Company and the Johnson Outdoors location where Humminbird electronics are produced.

In addition to the Team Championship event, Lake Eufaula will also host the Bassmaster B.A.S.S. Nation Kayak Series powered by TourneyX on May 1.